December 8 2011 - An analysis of 100 polls conducted by worldwide job search engine www.SimplyHired.com has shed some light on the impotance of social media in the process of job-hunting. Gautam Godhwani, co-founder and CEO said:

"The slow recovery of our economy has changed the way job seekers look for jobs as well as what they look for in the work they choose. Today's job seekers rely more heavily on social networking and referrals to find a job. In addition, job seekers are looking for more than just financial security - they prefer jobs that fit their personal requirements, whether that means location, benefits or even the company's recycling policy."

Some of the highlights of the survey:

Until recently, the rules of the game were simple: post your resume or CV on a host of jobsites and recruiters would come looking for you. Depending on your goals it could help to improve your resume by adding a second degree, for example there is a master in organizational leadership available at some schools.

The game has changed and is continuing to evolve, according to recruiters at MRINetwork, one of the world's largest search and recruitment organizations.

"Social media sites have become increasingly important platforms for finding jobs by facilitating connections and demonstrating the achievements and interests of job seekers. But capturing the attention of prospective employers and recruiters - who have made the sites a routine part of their searches - has also become more difficult because of the overwhelming amount of information available."

He offers several useful tips to adapt job seekers' messages so they are more likely to 'go viral':

"As recruiters, we know how difficult it is for job seekers to capture the attention of the people who can help them the most. But if you plan your approach, focus your content, pick your medium, and involve your friends, you can significantly increase your chances of getting through the noise." 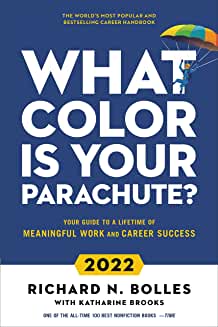 What Color Is Your Parachute? 2022: A Practical Manual for Job-Hunters and Career-Changers
by Richard Nelson Bolles and Katherine Brooks
With more than 10 million copies sold in 28 countries, the world's most popular job-search book is updated for 2022. Katherine Brooks tailors the late Richard Bolles's long-trusted guidance with up-to-the-minute information and advice for today's job-hunters and career-changers.
More information and prices from:
Amazon.com - US dollars
Amazon.ca - Canadian
dollars
Amazon.co.uk - British
pounds
Amazon.de - Euros
Amazon.fr - Euros